RUSH: We have a couple of sound bites from President Trump today. He was at the National 9/11 Pentagon Memorial and had some remarks. We have two sound bites. This is the first one right here. 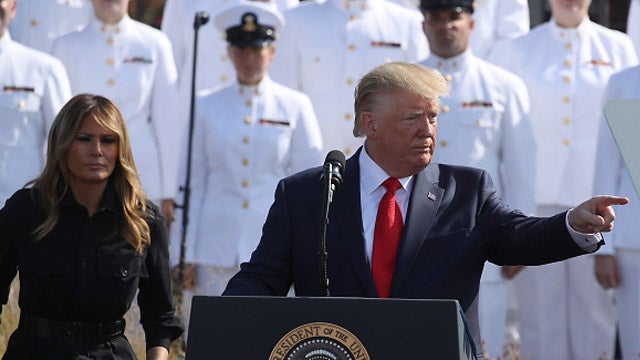 THE PRESIDENT: We do not seek conflict. But if anyone dares to strike our land, we will respond with the full measure of American power and the iron will of the American spirit. And that spirit is unbreakable. We had peace talks scheduled a few days ago. I called them off when I learned that they had killed a great American soldier from Puerto Rico and 11 other innocent people. They thought they would use this attack to show strength, but actually what they showed is unrelenting weakness. The last four days we have hit our enemy harder than they have ever been hit before, and that will continue.

RUSH: And the president then warned them, don't even think about trying anything like 9/11 again.

THE PRESIDENT: If for any reason they come back to our country, we will go wherever they are and use power the likes of which the United States has never used before. And I'm not even talking about nuclear power. They will never have seen anything like what will happen to them. No enemy on earth can match the overwhelming strength, skill, and might of the American armed forces.

RUSH: And that is exactly true. The only problem is we got some people that are afraid to use it, that want to apologize for it, that want to deemphasize it. But Donald Trump is not one of those people.